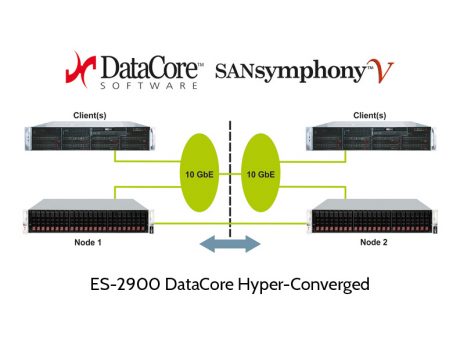 DataCore software offers especially high storage performance thanks to an intelligent caching technology designed by DataCore. EUROstor offers an ES-2900 product series based on this software, installed either directly under Windows operating system or as a virtual machine under VMware.
The latter configuration results in a Hyper-Converged Scale-Out Grid, that can be extended to up to 64 nodes. The vSphere 6 Essentials Plus License included in this package is restricted to a maximum of three nodes. If expansion to more than three nodes is planned, we advise to use a bigger license from the beginning, to avoid reinstallation of the grid.
All virtual disks are mirrored to a second node by the DataCore software – which can also be in a different area of the building. This allows for permanent access to the data even it one node has to be shut down. Furthermore, VMware’s vMotion function is supported.

single systems and additional products with these systems