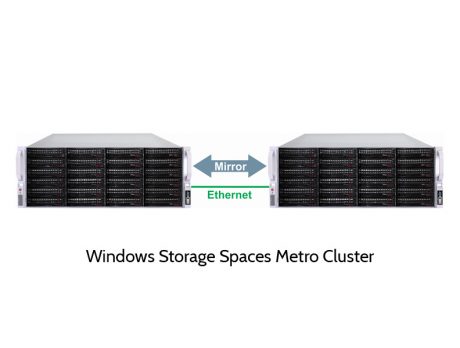 With the datacenter version of Windows 2019 a file server can easily be implemented as scale-out cluster. This is done by Storage Spaces Direct technology. Cluster nodes are connected with a 10 Gbit network. They then build a redundant file system spreading over up to 16 servers. All data is available on all the nodes.
Within the ES-2000 product series EUROstor especially configured servers for this purpose, with two strong processors, sufficient RAM and above all fast PCIe SSDs for write- and read-cache.
These server nodes can be delivered in different size, with up to 72 disks. But for high capacity need it is suggested to better use several small nodes than few bigger ones, as with each node also capacity and bandwidth of the cluster grow.
Storage Spaces Direct has been developed from the Storage Spaces Technology that already existed in Windows version 2012. The most important new feature is, that a file system can be extended over several nodes. Additionally, one media type is used for caching. Three media types are supported: PCIe SSD, SAS SSD and spinning disks. The fastest of the media used will automatically be defined as cache medium (at least two are required).
The cache is write- and read-cache, except in full flash configuration, where it is only used as write-cache. Theoretically using only one media type would work, but, for performance reasons, it is not recommended. Cache SSDs must support at least 5 DWPD.
Expansion of a cluster is easily done by adding nodes. With each single node performance and bandwidth grow. Partially populated serves can also be expanded on the fly. JBODs can also be used.
EUROstor offers storage systems tailor-made and, if required, also installs them at the customer’s site.

Further Scale Out Cluster and accessories: