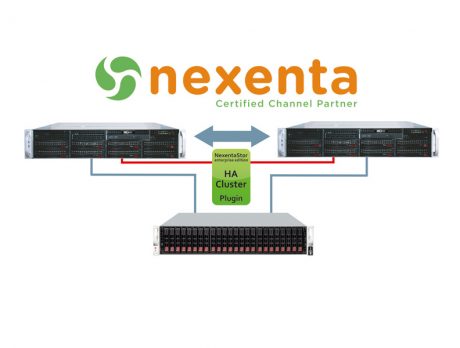 ES-2800 storage appliances for iSCSI, NAS and optionally for Fibre Channel volumes may also be configured as active/active HA-clusters with especially high failure-protection. In this case two nodes have access to a shared storage system, which in turn is protected against disk failure with the RAID levels of the ZFS. Both cluster nodes provide iSCSI and NAS volumes via joint virtual IP addresses. Thus, should one side fail or be shut down for maintenance reasons, data access by the individual clients may continue without interruption.
Due to the ZFS file system Nexenta-based storage systems provide high security against inconsistent file systems, which may be caused by so-called "stealth errors" of individual hard disks which, in most cases, go unnoticed by hardware RAID controllers.
Is it required, for security reasons, to provide redundant instances of the shared storage system in a HA-cluster? This may also be implemented with ES-2800 clusters by mirroring the disks or disk groups of both JBODs against each other. Since both disk enclosures may be accessed by both cluster nodes, optimal redundancy is achieved: the system is constantly available no matter which server or storage box fails. Moreover, it is possible to combine nearline disks with SSDs in the systems in order to be able to allocate the suitable storage type for each application.

dingle systems and additional products with these systems